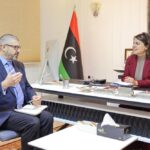 The Minister of Foreign Affairs of the Government of National Unity (GNU) Najla Al-Mangoush, discussed with the European Union (EU) ambassador to Libya, Jose Sabadell, a number of files of common interest in a meeting in Tripoli on Sunday and discussed the political developments in the country.

The Foreign Ministry said that the two sides discussed the latest on the necessity of activating the agreement with the EU that guarantees the rights for children living with HIV, in addition to facilitating the granting of Schengen visas to Libyan citizens.

They also reviewed the files of economic and security support provided by the EU to Libya, and the efforts of the Presidential Council and the GNU for successful national reconciliation steps. Sabadell said the EU would continue to support Libya until it holds presidential and parliamentary elections as per the people’s aspirations.

Al-Mangoush hailed the EU position that supports the Libyan people and confirmed that her Ministry and the GNU are not going to back down from working to regain stability and hinder any efforts to encumber holding elections, which shall be held as soon as possible.