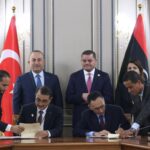 During his visit, Cavusoglu met with Libyan Prime Minister Abdul Hamid Dbeibeh at the government headquarters, where the signing ceremony took place.

According to sources of The Libya Update, Aoun claims that the Libyan premier made that move to “to pass suspicious oil agreement with Turkey to exploit oil and gas in offshore area near Tobruk in eastern Libya.”

Images of the ceremony posted by Cavusoglu shows Al-Huwayj signing the hydrocarbons deal on behalf of the Libyan government instead of Aoun.