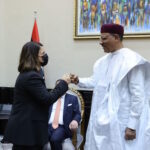 Libyan Foreign Minister, Najla Mangoush, stressed the importance and necessity of expediting the implementation and activation of the Quartet Agreement on protecting and securing common borders with Libya’s neighboring countries.

“The activation of this agreement would limit many destructive phenomena that threaten the peoples of the region, such as terrorism, cross-border organized crime and smuggling, in addition to reducing illegal migration, Mangoush said, during the reception of Nigerien President, Mohamed Bazoum, to the ministerial delegation headed by the Libyan Prime Minister, Abdul Hamid Dbeibeh, in the capital Niamey on Wednesday.

She explained that activating this agreement would enhance means of security stability for the entire region, and thus benefit all its peoples and meet their aspirations for construction and development.

It is noteworthy that Dbeibeh headed a ministerial delegation of the Libyan Government of National Unity (GNU), that paid a business visit to Niger on Wednesday, during which he met with President Mohamed Bazoum and a number of Nigerien officials.