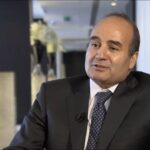 The Libyan ambassador to the European Union announced his resignation on Sunday after two years in office, citing the Libyan government’s policies as the reason behind his decision.

Hafith Qudor accused the Government of National Unity of attempting to “prevent” and “thwart” the general elections in December 24. He also criticized the government’s “apparent confusion in the management of public affairs” and “its failure, that all Libyans know and suffer from, in achieving the minimum level of national stability and livelihood”.

Qudor was appointed as the country’s ambassador to the E.U. in 2019 by the former Government of National Accord (GNA).