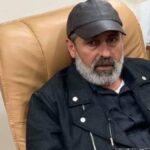 An armed group affiliated with Tripoli-based militant Ghniwa Alkkli announced on Wednesday that it rejects being integrated to the Interior Ministry, as demanded by the 5+5 Joint Military Committee.

The so-called Da’am Al-Estqrar (Stability Support) has joined Osama Juwaili, Commander of the Western Military District of the former Government of National Accord (GNA), in denouncing the committee’s request to freeze military agreements with all foreign countries, including Turkey.

The armed group has called on the 5+5 JMC “not to interfere in the structure of the security and military agencies”.