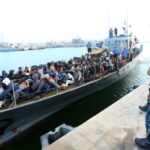 The Libyan Coast Guard, based in Tripoli, intercepted more than 113 migrants off the country’s west coast on Friday.

The migrants, who were intercepted in two separate operations, are from different African countries, the coast guard said.

They were disembarked at Tripoli’s Naval Base and then handed over to the Department for Combating Illegal Immigration (DCIM).

0 0
Previous : HNEC records over 455K voter registrations on Friday
Next : COVID-19 situation “out of control” in Gharyan, says hospital manager