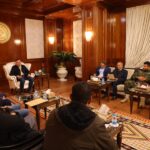 The Libyan government confirmed on Monday that production would resume at a number of oilfields which were recently shut down by a western faction of the Petroleum Facilities Guard (PFG).

According to the government’s statement, Dbeibeh “listened to the demands” of PFG and decided to “form a committee to follow-up on the difficulties they encounter”.

Libyan oilfields to reopen after deal between Dbeibeh and PFG, Italian press reports