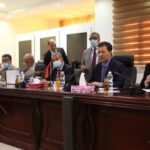 In a meeting held at the Ministry’s headquarters in Tripoli, the two sides discussed prospects for cooperation between the two countries in the fields of economy, energy, trade exchange, training and rehabilitation, and facilitating issuing visas, in addition to discussing the possibility of establishing a forum for businessmen.