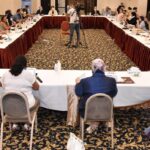 TUNIS – A group of Libyan experts – lawyers, judges, activists, and human rights defenders – met in Tunis from 16-18 June, to review the draft law on Combating Violence Against Women, announced the UN Mission in Libya on Saturday.

The forum led to a comprehensive review of the 2017 draft law which was fundamentally revised, enhanced, and importantly, vastly improved upon.

Supported by UNSMIL’s Human Rights, Rule of Law and Transitional Service, and the Office of the High Commissioner for Human Rights, as well as UN Women and UNFPA, the group of women and men, also met virtually several times during 2021 before convening in Tunis.

0 0
Previous : LNA conducts airstrikes in Southern Libya
Next : Any obstruction of Libya elections will be met with sanctions, US warns