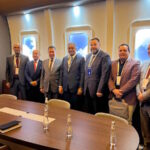 Transportations Ministry of the Libyan outgoing government announced that Minister, Salem Al-Shahoubi, discussed with his Tunisian counterpart, Rabih Al-Majidi, “the return of flights to Libya through Tunisian Airlines, and the opening of a maritime transport line between the two countries.”

The two ministers’ discussions came during a bilateral meeting on the sidelines of the Future of Aviation Conference, held in the Saudi capital, Riyadh, according to the ministry’s statement.

During their meeting, the Libyan and Tunisian ministers touched on the outstanding problems at the Ras Ajdir and Wazen border crossings between the two countries, as well as settling the financial debts of Libyan Airlines and Afriqiyah Airways.