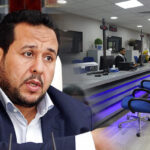 Libyan Wings Airlines, owned by Islamist Abdel Hakim Belhaj, will announce the suspension of all its flights in the next few weeks, sources from the Civil Aviation Authority told Libya Update.

The reason for suspending the company’s flights was due to its inability to pay the dues of its employees and debts to banks, handling companies and airports, especially in Tunisia and Turkey, the sources said.

A major financial crisis suffered by the Wings Airlines after detecting embezzlement during the closing of the last fiscal year 2021, they added.

The company is unable to repay the loans it obtained, including a financial loan from the Libyan Foreign Bank granted to it by order of the governor of the Central Bank of Libya (CBL), Al-Siddiq Al-Kabir, according to our sources.

Some of of Wings Airlines owners, including Abdel Hakim Belhaj, suggested the establishment of a new airlines under the name Taj Aviation, and its credentials had already been submitted to the Civil Aviation Authority, declaring bankruptcy and liquidation of Wings Airlines.