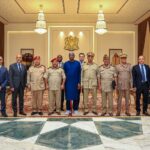 In his first briefing to the U.N. Security Council on the situation in Libya last Monday, Bathily said that he intends to bring together the committee, which is made up of military leaders from eastern and western Libya, and relaunch the so-called “military track”, the only surviving trace of the UN plan which provided for three paths (economic, political and military) with the aim of reunifying the country.

In the’ October 2020, the 5+5 committee signed an agreement in Geneva for a complete ceasefire on Libyan territory which it holds to this day.

According to Bathily, the situation in Libya requires “restoring legitimacy on sound political grounds”, explaining that “the ruling authorities are now able to provide services, but they must do so on legitimate grounds”.