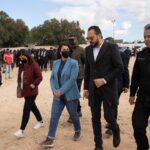 Libyan Foreign Minister Najla Mangoush visited on Saturday a migrants’ reception center in Tripoli along with Mohammed Al-Khoja, a militia leader who was recently appointed to head the Department for Combating Irregular Migration (DCIM) despite being accused of abuse against migrants.

Al-Khoja was the deputy head of DCIM and for years ran the Tarik al-Sikka detention center in Tripoli, which is notorious for abuses including beatings, hard labor and a massive ransom scheme. He also has close ties to other militia leaders and human traffickers in western Libya sanctioned by the U.N.

The European Union, which has given Libya millions of euros to help stem the departure of migrants on the dangerous journey, said last week it was seeking clarification from Libya’s government on al-Khoja’s appointment.

“We think that it’s in the interest of Libya to have in important positions people who have a clean track record,” said European Commission spokesperson Peter Stano.

Vincent Cochetel, the U.N. refugee agency’s special envoy for the Central Mediterranean, decried the appointment last week, saying: “This is quite telling of the situation in which we are. Do not go to Libya, it is unsafe.”

The Libyan government is yet to address the concerns raised by several international bodies over the appointment of Al-Khoja.