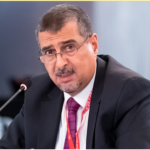 Libyan Muslim Brotherhood Group (LMBG) leader, Abdel Razzaq al-Aradi, said “the Libyan Presidential Election Law is challenged in its legitimacy, and it is the right of those who reject it to reject its consequences, especially the results of the presidential elections.”

“The alternative to this detailed law is a political settlement consisting of sharing responsibilities among all the main parties, holding legislative elections to enhance legitimacy, and building the state by exempting the constitutional process and sovereign positions from regional and political quotas,” al-Aradi explained in a series of tweets.

He claimed: “The strategy of Khalifa Haftar, Army Commander, and Aqila Saleh, Parliament Speaker, is clear: if one of them wins, he is president, and the other goes back to his previous work, and so they get rid of the political agreement and the High Council of State (HCS). If they fail, they go back to their previous work and repeat the scenario of Skhirat and Geneva agreement by reducing the winning president’s influence.”

It is noteworthy that the Libyan High National Elections Commission (HNEC) had officially received Law No. 1 of 2021 issued by the House of Representatives (HoR) regarding the election of the State President.

The law contained 77 articles clarifying the powers of the president and the conditions and procedures for candidacy and voting.