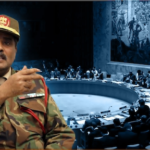 The General Command of the Libyan National Army (LNA) called Wednesday on the UN Security Council to develop a vision that imposes integrity of the Libyan elections scheduled to be held on December 24.

It also called, in a televised statement read by the LNA Spokesman, Ahmed Al-Mismari , on the Presidential Council and the Government of National Unity to abide by the road map approved by the Libyan Political Dialogue Forum (LPDF).

LNA Command affirmed its total rejection of any selective proposal by any local or foreign party that excludes any foreign force or mercenaries from leaving Libya.