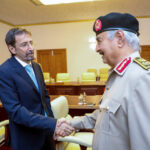 It is noteworthy that the Italian Foreign Minister Luigi Di Maio announced on April 28 the reopening of the Italian consulate in Benghazi and the appointment of Consul General Carlo Batori as its head.

0 0
Previous : Libyan officials discuss migration memoranda of understanding signed with Italy and Malta
Next : LNA denies fire broke out at HQs in Rajma