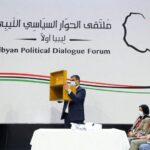 Informed sources reported that the advisory committee of the Libyan Political Dialogue Forum had agreed today in Tunisia that the election of the president should be directly by the people.

The source added that the committee also agreed to establish a Senate chamber equally between the three regions of Libya; Cyrenaica, Tripolitania, and Fezzan.

According to the source, no restrictions were placed to exclude any political figures from the presidential elections, pending the meeting of the Libyan Political Dialogue Forum tomorrow in Geneva to vote on the findings of the Advisory Committee in Tunisia.

0 0
Previous : Spain confirms its keenness to strengthen cooperation with Libya
Next : New Chargé d’Affairs at Libyan Embassy in Cairo takes over