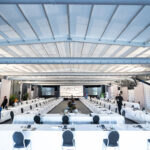 LPDF must not fall back on what it has agreed on regarding elections, says member

GENEVA – Amal Bugaighis called on her fellow members of the Libyan Political Dialogue Forum (LPDF) not to fall back on what they have agreed on previously with regard to holding national elections in December.

Speaking during an LPDF conference in Geneva on Tuesday, Bugaighis voiced her objection to holding a constitutional referendum ahead of the elections, which she viewed as potentially tool of exploration for preventing Libyans from going to the polls.