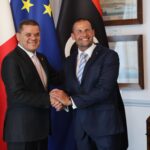 Libya’s outgoing prime minister Abdul Hamid Dbeibeh, was hoping to negotiate the release of millions Libyan assets frozen in Malta’s banks during his visit to the European country last August. However, the request was denied by his Maltese counterpart Robert Abela, according to a report published today by Times of Malta.

Citing unnamed government sources, the Maltese newspaper said Dbeibah was particularly interested in securing Libyan money once held at the now shuttered Satabank, which have not been cleared for release. The Libyans funds at Satabank reportedly amounts to more than €10 million.

The Libyan premier was left “disappointed” when Abela “privately turned him down” during their meeting on August 31.

Dbeibah travelled to Malta together with the governor of the Central Bank of Libya (CBL), Saddek Elkaber, who also held a separate meeting with his Maltese counterpart, Edward Scicluna.

Satabank, located at the Maltese town of St Julian, is being liquidated and its clients’ funds are being held at the Central Bank of Malta. Funds are being gradually returned to depositors but not where there are red flags or suspicion of impropriety.

A spokesperson for the Maltese government told Times of Malta that “the decision whether to release the funds or otherwise is not in the government’s hands”.

“The government remains committed to respect decisions made by multilateral institutions,” said the spokesperson.