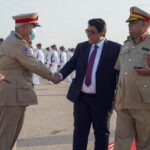 The leader of Libya’s Presidential Council arrived today in Tobruk, which will be the starting point of a tour across other cities based in the country’s eastern region of Cyrenaica, the council announced.

During his multi-day visit to the region, Mohamed al-Menfi  will meet with “many political, local and social components in various cities,” according to the council’s statement.

The visit comes amid growing frustrations in Cyrenaica over the performance of Prime Minister Abdul Hamid Dbeibeh, including the lack of fair representation for the region in his cabinet.

Earlier this week, Deputy Prime Minister Hussein al-Qatrani and other government officials from Cyrenaica accused the premier of violating the political agreement and undermining the region’s role in his government.

Al-Qatrani raised the possibility of forming a parallel government in the eastern region if Dbeibeh did not address these issues.

Dbeibeh to blame if parallel government created, says his deputy