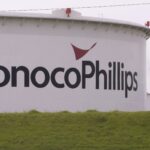 Minister of Oil and Gas of the Government of National Unity, Mohamed Aoun, discussed Friday, in Washington with Josh Corless, Vice President of International Governmental Affairs at ConocoPhillips, continuing investing in Libya.

They also discussed accelerating implementation of projects that will have an impact on oil and gas production increase, such as North Jalu Project and Plot NC 98.

The two parties emphasized the need to continue contacts and consultations to overcome the challenges facing ConocoPhillips in order to carry out its obligations in Libya.

It is to be noted that the Government of National Unity agreed, November last year, to sell the share of the American company ‘Hess’ in the Waha (Oasis) wells concession amounting to 8.16%, equally between the French Total and the American ConocoPhillips.