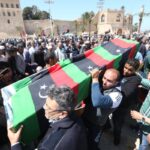 Libyan authorities and militias present in the country have been behind the killing of more than 580 civilians between January 2020 and March 2022, the World Organization Against Torture (OMCT) has denounced, noting that the figure includes those executed in prisons and people tortured to death.

“The cases we have been able to document represent only the tip of the iceberg,” said OMCT Secretary General Gerald Staberock. “Extrajudicial executions of defenceless civilians, often accompanied by horrific torture, are now endemic in Libya as government agents and armed militias unleash indiscriminate violence with impunity,” he said.

Staberock stressed that “the world cannot remain complacent and allow these heinous crimes to become the new normal”. Of the total 581 civilians killed, 487 died in the northern, eastern and western parts of the country, while the rest were killed in southern regions. The figure is in addition to the mass graves found in Tarhuna following the killings in April 2019.

The report, titled ‘That was the last time I saw my brother’, is based on interviews conducted over the past two years with witnesses and survivors by the Libyan Network Against Torture (LAN), a group of Libyan civil society organizations.

“The documented cases were perpetrated by various actors and militias in the country,” OMCT said in its report, which details that the deaths have been due to “indiscriminate attacks on residential areas,” “executions in detention facilities,” “custodial torture deaths,” and “instances where bodies were found dumped.”

The organization stressed that the LAN “was not able to verify all the allegations received”, although it praised that “it was able to document thousands of cases of torture and hundreds of deaths of arbitrarily executed or victims of forced disappearances that were later killed”.

State armed groups and militias in #Libya killed at least 581 civilians, both nationals and migrants, between January 2020 and March 2022.

Our 🆕 report is the first to document these cases
▶️ https://t.co/vPbSAKJgIm

0 0
Previous : PC President arrives in Tripoli coming from New York
Next : UN Envoy to Libya to start working in the country in early October