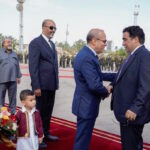 “PC President had met, on the sidelines of his participation in the UN General Assembly session, a number of presidents, kings and state leaders, within the framework of international support for the Libyan file and bilateral cooperation between Libya and many other countries,” according to the Office.