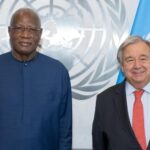 The newly appointed U.N. Envoy to Libya, Abdoulaye Bathily, officially assumed his duties on 25 September. However, he will conduct a series of meetings with senior UN officials and representatives of Member States in New York before his arrival in Libya in in early October.

This was stated by the U.N. Support Mission in Libya (UNSMIL) today, which also pointed out that Raisedon Zenenga and Georgette Gagnon will continue their roles as Deputy for Political Affairs and Humanitarian Coordinator respectively.

1/3 Mr. Abdoulaye Bathily of Senegal officially assumed his duties as of 25 September as the new Special Representative of the Secretary-General for Libya and Head of the United Nations Support Mission in Libya (UNSMIL). pic.twitter.com/yW9d7L4zga