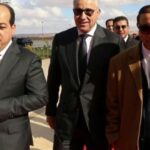 MP: Bashagha and Maiteeq among candidates nominated to replace Dbeibeh

Muhammad Al-Abani, a member of parliament, said that replacing the Government of National Unity has become a decision of at the hands of the House of Representatives since its session last week.

Al-Abani explained in press statements that a number of candidates have already been nominated to replace Prime Minister Abdul Hamid Dbeibeh, including Fathi Bashagha, Ahmed Maiteeq and Muhammad al-Muntasir.

The parliament voted on Monday to replace Dbeibeh’s government due to its failure to organize the general elections that were supposed to take place in December last year.

The parliament announced on Tuesday that it started to accept candidates’ paperwork for the position of the Prime Minister and the selection of the winning name to replace Dbeibah will take place on February 08.