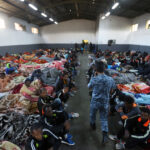 Médecins Sans Frontières (MSF), an international humanitarian NGO, has urged the European Union and the United Nations to “urgently review – and if needed suspend – current cooperation agreements with Libyan authorities” over the latter’s failure to end persistent abuse of migrants in detention centers.

In a report published on Monday, MSF, also known as Doctors Without Borders, called on the same international stakeholders to “end political, financial and material support to the system of forcible returns from international waters in the Central Mediterranean Sea to Libya.”

According to MSF, its report, Out of Libya, attempts to address “the main challenges encountered, mostly resulting from third countries’ unwillingness and UN agencies’ inability to fully abide with their protection mandates and obligations.”

The NGO highlighted that “as repeatedly acknowledged by international bodies, including the United Nations and the EU Commission, Libya is currently not a safe place for the purpose of disembarkation of people rescued at sea.”

MSF emphasized that any support from international stakeholders to Libyan authorities regarding the migration crisis should be “conditional to the prompt and smooth facilitation of IOM, UNHCR and other evacuation flights from Libya; the signature and ratification of the 1951 Geneva Convention relating to the Status of Refugees and its 1967 Protocol; a formal recognition of UNHCR and allowing it the full exercise of its mandate; the prompt release of all arbitrarily detained migrants, refugees and asylum seekers and the end of arbitrary detention in Libya; the end of forcible returns from Libya in particular to countries where returnees’ lives may be at risk; acceptance of independent humanitarian access for assistance and protection.”

The organization also urged the Libyan authorities to “end forced returns from Libya in particular to countries where returnees’ lives may be at risk,” and “immediately release all arbitrarily detained migrants, refugees and asylum seekers, and end arbitrary detention in Libya”.

MSF insisted that the country’s authorities must “sign and ratify the 1951 Geneva Convention relating to the Status of Refugees and its 1967 Protocol”, and “formally recognize UNHCR and allow it the full exercise of its mandate”.

By November 2021, there were an estimated 600,000 migrants of more than 44 different nationalities in the country, according to the organization’s report.

An urgent acceleration in the evacuation of the most vulnerable people from Libya to safe countries is needed now. https://t.co/xrzvUEzAa0