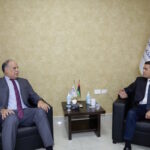 HNEC confirmed on its official website that the two parties discussed during their meeting at the Commission’s headquarters the repercussions of postponing the presidential and parliamentary elections that were scheduled to take place on December 24.

Al-Sayeh and Bushnaf reviewed the latest developments of the electoral process, the reasons that prevented its completion, in addition to the preparations for the next stage, according to HNEC.

0 0
Previous : HCS Spox denies Aqila-Mishri meeting in Morocco
Next : SOHR confirm tensions between Syrian mercenaries and their commanders in Libya