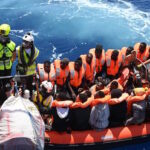 Nearly 300 rescued migrants to be disembarked in Sicily

The humanitarian rescue ship Ocean Viking has received the green light to disembark in Sicily, Italy 294 persons rescued from distress at sea. Some of the survivors have been holding out on the ship for ten days and nights.

The Ocean Viking with 294 rescued migrants on board was assigned the port of Pozzallo on the Italian island of Sicily, SOS Mediterranee announced on Twitter late on Sunday.

The rescuers of the European non-governmental organization, which operates the Ocean Viking, said the long wait had been “draining.”

According to the SOS Mediterranee, among the 294 rescuees were almost 50 minors, the youngest of them merely three months old.

In early May, the Ocean Viking rescue ship had already disembarked the same number of rescued migrants in Sicily.