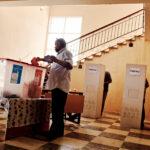 A new committee of the House of Representatives, which is tasked with drafting electoral legislations, will hold its first meeting with the High National Election Commission (HNEC) and the U.N. Mission in Libya following Eid Al-Adha holiday (from July 19th to 23rd), committee member Muftah Quaider said on Wednesday.

“We have a decision issued by the House of Representatives in 2014 regarding the mechanism for directly electing the head of state, and we will use it in our work,” Quaider told reporters.

He added that the parliamentary seats which are up for re-election in December will be according to electoral districts, which were set out by Law 17 of 2013 that was issued by the Constitutional Authority at that time.

0 0
Previous : Presidential Council directs government to “harness all capabilities” to support Tunisia
Next : NOC and its subsidiaries evaluate COVID-19 measures