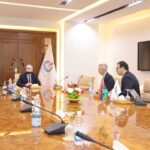 Mustafa Sanalla, the NOC chairman, met on Sunday with representatives of Deloitte to discuss the procedures of the audit.

According to the state-owned corporation, the decision to hire Deloitte was made to consolidate “the principle of transparency and good governance and developing its work in the oil sector.”

Deloitte was previously hired by the United Nations Mission in Libya (UNSMIL) to audit the eastern and western branches of the Central Bank of Libya (CBL). The audit report was delivered to the U.N. and the Libyan government last month, but it wasn’t released publicly.