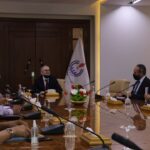 Mustafa Sanalla, chairman of the National Oil Corporation (NOC), held talks last Thursday with Khaled Al-Konsel, general manager of the Libyan Foreign Bank, to review joint cooperation between the two state-owned institutions, according to a statement by the NOC.

The discussion revolved around joint work and “issues of common concern” as well as “overcoming difficulties and remove obstacles that stand in the way of the work of the two institutions.”

Since late 2020, the NOC started transferring oil sales income to the accounts of the Libyan Foreign Bank instead of the Central Bank of Libya, due to a dispute with the latter over alleged inaccuracy in reporting oil revenues.