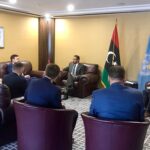 Rear Admiral Fabio Agostini, the commander of the European Union’s Operation IRINI, discussed his “assessment of the overall strategic and security situation in and around Libya” with a number of Libyan, European, and American officials during his visit to Washington and New York last week, according to a statement by the Operation IRINI.

“The talks mainly focussed on the overall situation in the Central Mediterranean Sea, explaining IRINI’s tasks describing the results achieved and on the need to establish a fruitful cooperation with US Commands in the area,” reads the statement of the Operation IRINI.

“The US counterparts shared the Commander’s assessment of the overall strategic and security situation in and around Libya given the fact that both players are stakeholders in the same geographic area,” it added.

In New York, Agostini met the UN and Chairman of the UN Sanctions Committee on Libya, T.S. Tirumurti, and the Permanent Representative of Libyan Mission to the UN, Taher Al-Sunni.

“The very fruitful discussions with Ambassador T.S. Tirumurti mainly focussed on the results of the Operation and the cooperation with the United Nations’ relevant bodies,” the European operation said in a statement.

“During the frank and open talks with Ambassador Taher Al-Sunni, there was an interesting exchange of point of views about the situation in Libya,” it said.

“The Operation Commander could inform about the results of the Operation in the implementation of UN Security Council Resolutions and discuss about the possibility to resume the training of the Libyan Coast Guard and Navy.”