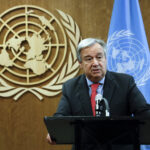 The Libyan Parliament’s Tuesday session concluded with several points, including the affirmation of informing the Secretary-General of the United Nations, Antonio Guterres, to prevent foreign interference in the Libyan affairs.

The Parliament also stressed on demanding the Libyan Foreign Ministry to take the necessary measures for the ambassadors of foreign countries to respect Libyan law and diplomatic norms.

The Parliament Speaker Aguila Saleh said members of the Parliament agreed on forming a committee to review controversial articles in the draft constitution.

Saleh added that the committee is to be formed in consultation with the High Council of State (HCS), and most of its members should be experts who are chosen under specific conditions.