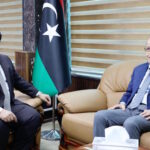 President of the Libyan Presidential Council (PC), Mohamed al-Menfi, met Sunday with the Governor of the Central Bank of Libya (CBL), Siddiq al-Kabir.

Al-Kabir gave a briefing on his foreign visit, the steps taken to unify the monetary institution, and the bank’s follow-up on the financial and economic conditions in the country.

Al-Menfi affirmed the continuation of the Presidential Council’s support for efforts aimed at achieving economic stability, including unifying the monetary institution in all its stages.