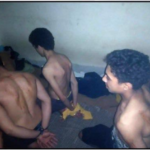 Perpetrator of Egyptian migrants detention has been arrested, after being identified and tracked by Information and Communications Technology Unit at the Office of the Libyan Attorney General, in cooperation with the Western Border Region Investigations Office, according to the Attorney General.

After being questioned, it has been proven that the perpetrator had tortured the victims after detaining them in order to obtain illegal benefits, forcing their families to pay for him when watching video recordings documenting torture scenes, the Office of the Attorney General said in a statement on Sunday.

The investigation also resulted in proving that the accused was involved in activity of criminal groups that organize illegal migration operations and human trafficking across several countries, the Office stated.

He had recently taken over the coordination of illegal migration operations through the management of an organization operating under his control at home and linked with other networks operating for him in neighboring countries, it added.

Thus, the Public Prosecution concluded by ordering the pretrial detention of the accused, and issued orders to arrest and bring his accomplices, it pointed out.

0 0
Previous : MP: Passing President Election Law is positive step to get out of current situation
Next : 1291 people test positive for Coronavirus, 14 others dead in Libya