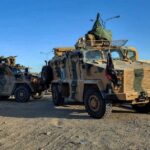 Military convoys from the western cities of Misurata, Zintan and Zawiya entered the capital Tripoli this morning, according to multiple press reports.

The convoys reportedly arrived to back the government of Abdul Hamid Dbeibeh who refuses to hand over power to his parliament-designate rival Fathi Bashagha.

Over the course of last week, Bashagha met in Tunisia with several military leaders from Misurata as well as a number of ministers serving under Dbeibeh’s cabinet. The talks reportedly focused on securing a peaceful entrance to the capital by Bashagha’s government who is yet to assume office given resistance from Dbeibeh.