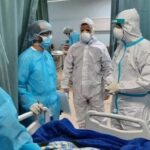 The National Center for Disease Control in Libya announced the registration of 1,710 new cases with COVID-19, 280 recoveries, and 5 deaths during the last 24 hours.

In a statement on Friday, the NCDC said the number of active cases in the country has reached more than 7,500, which is a new record that Libya has not reached since last year, at the highest spread of the virus. This number puts more pressure on the country’s isolation centers, which already suffer a lack of oxygen supply and medical beds. This is in addition to the suffering of many medical staff who have not received their salaries for more than six months.

The total number of cases reached more than 200 thousand, of whom 180 thousand recovered, while 3,322 died.

On the other hand, the number of vaccines imported by the Government of National Unity is still very few, despite the promises made by Prime Minister Abdel Hamid Dbeibah when he was elected last February. The number of vaccinated people is only 400,000 out of a population of nearly seven million.

0 0
Previous : Libya closes borders with Tunisia after spread of Delta variant
Next : HNEC Head: It is technically difficult to hold constitutional referendum and elections on 24 December