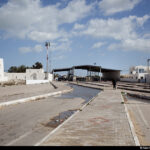 Libya closes borders with Tunisia after spread of Delta variant

The Interim National Unity Government in Libya announced that it closed its land and sea borders with Tunisia, after the epidemiological situation worsened in the neighboring country. This coincides with the Tunisian government’s announcement of the collapse of the country’s health system and its inability to control the epidemic.

Libyan government spokesman announced that the closure of Libya’s western borders with Tunisia starts from Thursday and will last for a week, subject to extension, stressing that the Libyan authorities will ensure the evacuation of Libyan citizens stranded in Tunisian cities.

On the other hand, the Ministry of Higher Education in Libya announced the suspension of study in all universities, after the number of COVID-19 cases in the country increased by 31 percent in the last few days.

Libya recorded over 199,000 cases of the virus since the start of the pandemic in March last year, over 180,000 of which have recovered. Death toll of the virus reached 3,227 in total, while about 400,000 people have received the COVID vaccine.