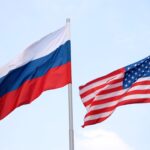 “Moscow and Washington have provided great support to [the Government of] National Unity, adhering to the peaceful path that was adopted in the framework of the Libyan political dialogue in Geneva and beyond,” the minister said, when asked how he assesses the dialogue on Libya that took place at the meeting between Russian President Vladimir Putin and his US counterpart, Joe Biden.

According to the state minister, the rapprochement of the positions of Russia and the US and their support for stability in Libya gives the GNU wider opportunities, including in the matter of holding elections.