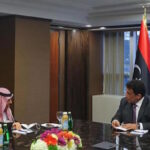 Saudi Foreign Minister Prince Faisal bin Farhan affirmed his country’s keenness to “return of stability to Libya,” expressing his hope for “the success of all stages of the political agreement” between all parties.

This came during a meeting between the Saudi head of diplomacy with the President of the Libyan Presidential Council (PC), Mohamed al-Menfi, on Tuesday at the headquarters of the Libyan mission to UN in New York, where they discussed “bilateral relations between the two countries” and a number of Arab and international issues of common interest, according to the Media Office of PC President.

During the meeting, which was attended by Libya’s representative to the United Nations, Taher al-Sunni, al-Menfi praised “the positions of the Kingdom of Saudi Arabia towards the Libyan crisis, and its welcome to the Libyan Political Dialogue, and reaching a solution that restores stability and peace to Libya.”