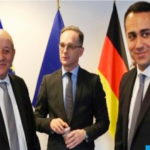 German Foreign Ministry confirmed holding meeting on Libya on the sidelines of the 76th session of the United Nations General Assembly on Wednesday in New York under the chairmanship of German Foreign Minister, Heiko Maas, and his French and Italian counterparts, Jean-Yves Le Drian and Luigi Di Maio.

The Ministry referred to the meeting dealing with how to strengthen the political process in Libya, as the country is on the path towards free, fair and inclusive elections at the end of the year, while the main endeavors include the withdrawal of all forces, mercenaries and soldiers, and commitment to the ceasefire agreement.

The meeting, , held in the presence of representatives of the United Nations and other countries and organizations participating in the Berlin Process on Libya,
is a preparatory meeting for an international conference hosted by France in November.

0 0
Previous : Saudi Arabia hopes success of all Libyan political agreement stages
Next : Haftar steps down from LNA leadership ahead of elections