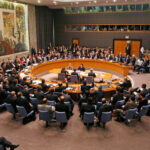 Nicolas de Rivière, the French ambassador to the United Nations, announced on Friday that the Security Council will convene on the 15th of July to discuss the implementation of its resolutions on Libya, including monitoring the ceasefire, the withdrawal of foreign forces and mercenaries and preparations for general elections in December.

During a press conference in New York, the French diplomat, who chairs the Security Council presidency for the month of July, said that his country will focus on issues of the Middle East and North Africa region, including Libya, during its presidency of the U.N. Security Council.