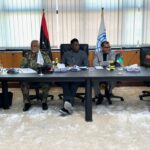 After the conclusion of the latest meeting of the Joint Military Commission (5+5) in Sirte Monday, SRSG Abdoulaye Bathily called on the national authorities “to recommit to fully supporting the implementation of Libya’s 2020 ceasefire agreement.” He called upon the government to allocate “appropriate resources and step up political efforts to end the stalemate and reestablish legitimacy to Libyan institutions through elections.”

SRSG Bathily, who chaired the two-day meetings, commended JMC members for their “determination and commitment towards peace and stability in Libya and its unity and integrity.” He called on political leaders “to show the same spirit of unity and abnegation as their brothers in uniform in the Joint Military Commission in order to overcome the current crisis.” A UNSMIL statement said.

The SRSG “reiterated UN support to the JMC and relevant Libyan institutions efforts towards reunifying the military and security institutions, withdrawing mercenaries and foreign fighters, as per the action plan of the committee, to preserve the sovereignty of Libya and its territorial integrity.” He also stressed “the need to identify ways to engage neighboring countries in ending the presence of these forces on the Libyan soil. He also called on the international community to support the 5+5 JMC, which “represents an instrument of hope for all Libyans”.

During the meeting, the JMC discussed plans to “engage armed groups with the view to creating a conducive environment for a sustainable peace and security in Libya, among other matters.”

The closing session was attended by a visiting team from UN Headquarters that has been tasked to “assess how UNSMIL is implementing recommendations made by an Independent Strategic Review conducted last year with the view to enhance the Mission’s delivery on its mandated tasks to better meet the expectations of the Libyan people and institutions for peace and stability.”