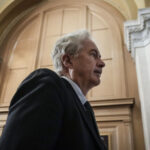 CIA Director’s visit to Libya Not Just a Visit

The visit of the Director of the Central Intelligence Agency William J. Burns to Libya was surrounded by a halo of mystery and a lack of details about its reasons, which opened the door to wide speculation, especially about its timing. The visit came weeks after the handover of Abu Agila Mohammad Mas’ud, suspected of making the bomb that destroyed a passenger plane over Lockerbie, Scotland, in 1988 that killed 190 Americans, amid rumors that more suspects will be extradited.

Analyzes that tried to explain the reasons for the visit dealt with its impact on the political position of the unity government headed by Abdul Hamid Dbeibeh, which has been suffering isolation due to its many disagreements with prominent local and regional powers and is looking for allies and strong supporters at home and abroad.

The head of the Libyan government in Tripoli, Abd al-Hamid al-Dbeibeh, had received Burns, accompanied by the Chargé d’Affairs of the US Embassy and his accompanying delegation, in the presence of Libya’s Foreign Minister Najla El Mangoush, and the head of the intelligence service, Hussein al-A’eb. This was amid remarkable secrecy on what was discussed or agreed upon during the visit.

According to the media office of the Libyan government, Burns stressed “the need to develop economic and security cooperation between the two countries.” He praised “the state of stability and growth witnessed in Libya recently.” The Minister of Foreign Affairs and International Cooperation of the Government of National Unity, al-Mangoush, said that “the meeting with the Director of the CIA witnessed fruitful exchanges on cooperation in security issues, which paves the way towards stability and elections.”

“We look forward to translating these excellent initiatives into concrete steps shortly,” she tweeted.
On the other hand, the spokesman for the Government of National Unity, Muhammad Hammouda, stated that “the main goal of the visit of the CIA director to Libya is to achieve stability in the country.”

Hammouda considered, in a press statement, that “the United States of America seeks to support Libya internationally so that the country can hold new elections soon.”

“The meeting with the Prime Minister and the Director of CIA discussed common issues between the two countries, and they also discussed the Russian war against Ukraine, combating terrorism, and issues related to oil,” he pointed out that.

For his part, Ned Price, the Spokesperson for the U.S. Department of State said he cannot comment on the visit of US Intelligence Director William Burns to Libya.

“Washington is engaged with Libyan leaders and their regional partners to set a date for the elections in response to the desire of 2.5 million Libyans who registered their data to vote during the postponed elections, Price stressed.

This American secrecy about the reasons for this visit increased the interest of observers in Libya, with anticipation of its results soon. This is especially regarding the extradition of more suspects in the “Lockerbie” case, such as Abdullah al-Senussi, the former intelligence chief and brother-in-law of Colonel Gaddafi. He was the second man in the Gaddafi regime, who is currently in a prison in the Libyan capital.

Libyan legal researcher Ramadan Al-Tuwaijer believes that the visit, regardless of what its reasons are, indicates that there is some threat to US interests in Libya that necessitated action at this level.

“It seems that a threat to the interests of the United States of America in Libya is what made the director of the CIA make this visit, at this particular time,” Al-Tuwaijer said.

“The visit comes at a time when Libya is losing its sovereignty and stability, and foreign bases and forces from various international powers are stationed everywhere in its land,” he added.

He called on the Libyan authorities “to create a balance in their international relations because all those involved in the crisis only pursue their interests.

“I hope the Libyan parties work to unify the security and military institutions, remove all foreign forces and mercenaries, reconcile with each other, and establish balanced and strong relations with various international parties, including the United States and Russia, to restore Libya’s sovereignty and make it a neutral country.”

In turn, political analyst Muhammad al-Hangari considered that the visit constituted “important support for the Tripoli government that came just in time, as a public recognition and renewal of his Dbeibeh’s legitimacy.”
“The visit aims to open the file of cooperation in combating terrorism after Dbeibeh demonstrated his government’s strong political, administrative, and security control over the western region and its adherence to going to elections,” he added.

The visit of an American official of this level to Libya for the first time since 2012, amid a complex situation in the country, and weeks after the controversial handover of Mas’ud to Washington, all of this makes the visit worth the attention that has been focused on it, according to the Libyan academic and analyst, Abdul Ghani Atia.
“This visit will completely shuffle the cards in the Libyan scene. On the one hand, it was no surprise that many talk that Abdullah Al-Senussi will be handed over to the US,” Atia believes.

“If Al-Senussi, who is accused of war crimes inside Libya and considered a controversial figure in the country, is extradited, this will represent a cave of treasures in the Lockerbie case. The man was Gaddafi’s right arm, and he is even more dangerous than Saif al-Islam, the son of Gaddafi himself.” Ati said.

Atia believes that the United States is working on two files that are linked to each other: the political file and the security file. “Washington supports the settlement in Libya and the holding of elections in which the Libyans express themselves, which contributes to achieving security stability in the country, he explained.

“Since the security of Libya is directly linked to the security of North Africa and the southern Mediterranean, the US does not want any destabilization of security in this region, which could open the way wide for the spread of extremist groups that threaten Libya and the region as a whole,” he concluded.