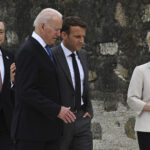 The United States, Britain, France, Germany and Italy threatened sanctions against individuals or groups that seek to undermine peace and political transition in Libya as the general elections in the country looms.

“We recall that individuals or entities engaging in, or providing support for acts that threaten the peace, stability or security of Libya or that obstruct or undermine the successful completion of its political transition, may be designated by the Committee established pursuant to paragraph 24 of resolution 1970 (2011) for the travel ban and asset freeze measures,” the five countries said in a joint statement released today.

“We welcome the announcement yesterday by the head of the High National Elections Commission that the Endorsement List forms required for presidential and parliamentary candidates will be published by HNEC, an important development for those wishing to be candidates, as outlined in the HNEC implementation plan,” they said.

“We reiterate our support to HNEC as it conducts its mandate in full independence and we urge all actors to heed its technical advice and respect its expertise; we condemn all actors who undermine its action by threat or obstruction.”

The Western countries reiterated their commitment to “cooperating with Libya on important shared challenges such as terrorism, migration, climate change and protection of the environment.”

“Improved stability in Libya will also lead to increased investment, which in turn creates jobs and improves livelihoods for all Libyans.”

1/2 The Libyan hosted October 21 conference allowed the world to recognize the great potential for #Libya should its positive trajectory continue towards the holding of Presidential and Parliamentary elections.https://t.co/KbWBSl5U3W