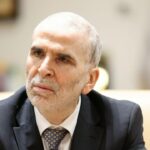 The South Tripoli Court of Appeals has once again rescheduled its ruling on the case of former chairman of the National Oil Corporation (NOC), Mustafa Sanalla, to September 7, according to multiple press reports.

Sanalla rejected the premier’s decision and filed an appeal before the judiciary.

The case ruling was originally scheduled to be issued on July 27, but the appeal court announced it will postpone it until August 17.