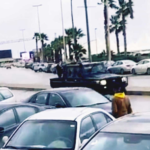 The vicinity of Tripoli port witnessed today armed clashes between the Deterrence Force and Al-Nawasi Brigade.

Photos obtained by the Libya Update showed the movement of armed vehicles along the Shatt road, in conjunction with the armed clashes at the port of Tripoli.

It is noteworthy that Tripoli witnesses from time to time armed clashes among militias that control the city.