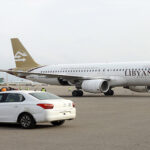 Tripoli’s airspace closure for domestic flights continues for third day, with the exception of international flights.

The closure came after the Spokesman for the outgoing Government of National Unity (GNU), Muhammad Hammouda, claimed in a press statement about the reason for the closure of the airspace on 4/3/2022, that, “There are reports of low-flying drones over Mitiga airport in Tripoli.”

The strange thing is that international flights continued with “the presence of drones”, according to the claim.

According to official sources, the suspension of flights is to impede the entry of the new government to Tripoli.

The sources also confirmed that the closure came in conjunction with the influx of convoys of armed groups on the order of the outgoing Prime Minister, Abdel Hamid Dbeibeh, to prevent the entry of the new Prime Minister, Fathi Bashagha, and his government ministers to perform their duties from the capital, Tripoli.