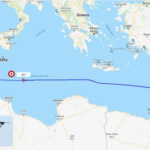 Two Airbus aircrafts of the Turkish Air Force coming from Ankara were expected to land at the al-Watiya airbase in western Libya Wednesday afternoon, reported ItaMilRadar, a website tracking military flights over Italy and the Mediterranean Sea.

“This afternoon the two Turkish aircraft will return to Ankara,” the website added.

During the flight to Libya the two aircraft avoided entering the Greek FIR, it noted out.