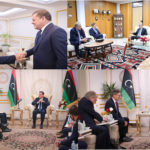 Date: Wednesday, September 15, 2021
36 Views
Counselor of the United States Department of State, Derek Chollet, said he discussed December elections in Libya with Abdul Hamid Dbeibeh, Prime Minister of the Government of National Unity (GNU), and Khaled al-Mishri, Head of the High Council of State (HCS), and Vice-Presidents of the Presidential Council (PC), Mousa al-Koni and Abdulla al-Lafi, during his visit to Tripoli, along with U.S. Ambassador to Libya, Richard Norland.

“It’s a pleasure to visit Tripoli along with U.S. Ambassador to Libya Richard Norland. We met PM Dbeibeh to re-affirm US support for the GNU’s work to stabilize Libya politically and economically, and to prepare for December’s elections,” U.S. Embassy in Libya quoted Chollet in a tweet.
“HCS Chairman Mishri and I had a substantive discussion about the importance of holding national elections as scheduled,” he pointed out.
“I emphasized the U.S. and international position that Libyan actors need to finalize electoral legislation that takes into account the legitimate concerns of the Libyan people,” Chollet added.
“I expressed our support for the work of the PC towards national reconciliation,” he said.
“In today’s meeting, Vice-Presidents Koni and Lafi shared their commitment to holding presidential and parliamentary elections as scheduled on December 24 and their important work seeking to re-unite Libya’s institutions and fully integrate all regions of the country,” the U.S. official stated.